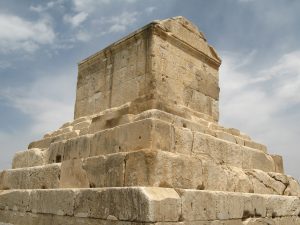 We now travel east across the Aegean to focus on the rise of the new Persian Empire that would come to influence Greek affaires throughout the Classical period. Persia would seemingly emerge out of no where, dominating the Near East and affecting the regions around them. Cyrus would be the founder, establishing the empire in his lifetime, to where he would be given the title, Cyrus The Great of Persia.

Persia: Rise of an Empire 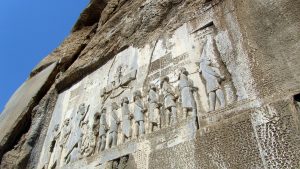 Cyrus, the founder of the Persian Empire was now dead, but the Empire would continue on spreading its boundaries even further. After a smooth transition of power, succession crisis and conspiracy would rock the royal court until a new ruler, Darius would emerge and would once again bring stability back to the Empire. The Empire now looking west, Darius would be the first ruler to order a campaign against Greece lands. 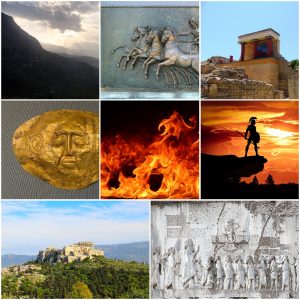 Ready to now continue into the Greek and Persian war period, we take some time out to look back over the past 13 episodes to refresh our memories. I also answer some question that listeners have written in with. 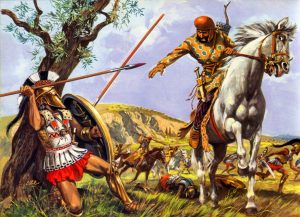 We have now arrived at a point where the Greek world moves in to what is known as the Greek and Persian wars. The colonies in Ionia and beyond, finding themselves under the Persian rule, attempt to gain their freedom. They will seek help from their Greek cousins back on the mainland and in doing so they will launch an event seen as the origins of the Greek and Persian wars, The Ionian Revolt. 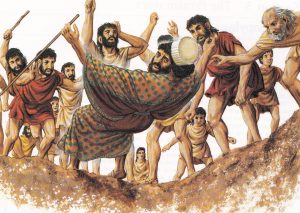 “Master, remember the Athenians” had been uttered to Darius after his learning of their involvement in the Ionian revolt. These words would not be forgotten, with Darius mounting two separate campaigns focused towards Greek lands. This would lead to what is known as the First Persian invasion and would climax in the battle of Marathon.

17. The Battle of Marathon

The first major battle of the Greek and Persian wars would now take place in 490 BC at the Bay of Marathon. After days of standing off from one another, the Greeks would finally rush into action against the Persians. Many questions are still asked in regards to events during the battle, which do not have any clear answers. Though, the battle at Marathon would not be the last time the Greeks would have to array themselves for battle against the Persian empire.

The Battle of Marathon 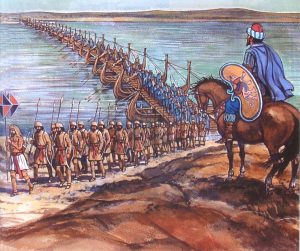 The Persians first attempt at invading Greece had been defeated at the Bay of Marathon. Political developments in Athens would continue to evolve with one hero of the hour replace by another.  The Persians ten years later would launch the second invasion under the new king Xerxes. The largest force yet assembled in the ancient world would march against Greece with a number of engineering feats achieved to facilitate their advance. 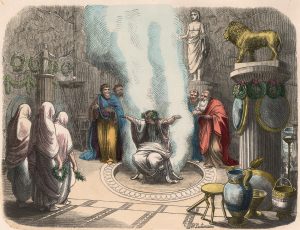 While Xerxes had been planning his invasion of Greece, the Greeks had not been sitting by idle. The threat had been in most people’s minds since the end of Marathon and especially in Themistocles’. Athenian policy now moved in the direction of the creation of a fleet which would be instrumental in the defence. But it was in the last couple of years leading up to the invasion that all of Greece, well those city states that wanted to take action, attempted to develop a united plan to meet the invasion. 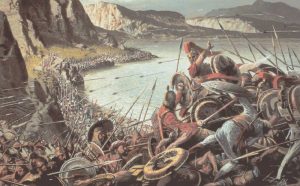 20. The Battle of Thermopylae

A Greek force had now arrived at the pass of Thermopylae. This would be the site of one of the first clashes between the Greeks and Persians of the second invasion. The Persians would be halted for seven days and three days of fighting would ensure between both sides. A traitorous action would see the Greek position defeated, though this would give rise to the legend of the 300 Spartans. But many more Greeks would fight and die at the pass of Thermopylae protecting their home land.

The Battle of Thermopylae 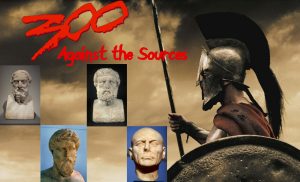 The movie 300 would be the most recognisable connection to Greek history in modern popular culture. For many this would be their only exposure to Greek history, but is a distorted view of history being put on display. Or is there some actual historical value to be taken from this re telling of Leonidas and his 300 Spartans sacrifice in the pass of Thermopylae. Many would come to dismiss the film, but I look at the film against the Greek sources, showing that much of what is presented has drawn upon what the ancients have recorded. 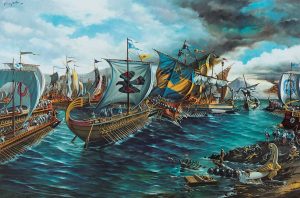 22. The Battle of Artemisium

The battle of Thermopylae didn’t take place in isolation; it was part of a bigger defensive plan to delay the Persian march into central Greece. The battle of Atemisium would see the Greek fleet challenge Xerxes armada that was sailing to support the land army. The position at Artemisium would protect the Thermopylae position from being out flanked by the Persian navy, but could the Greek fleet stand up to a force over twice their number.

The Battle of Artemisium 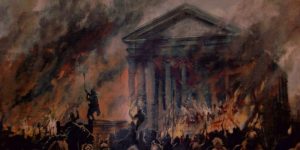 With the defenders in the pass at Thermopylae defeated and the Greek fleet having withdrawn from Artemisium, the path into central Greece was open. Xerxes forces would march through Greek territory incorporating more subjected cities into their sphere of influence or raising to the ground those resisting. Xerxes would finally then march onto Athens it’s self, Persia gaining revenge for the sack of Sardis. Though, Athens may fall but the Athenians were still a force to be reckoned with, if only they and the other Greeks could unite.

The Fall of Athens