With the region of Ionian in the Persian Empire back under control, Darius could now turn to other business. He had reportedly, after learning of the Athenian involvement in the revolt, had one of his servants repeat to him three times “Master, remember the Athenians” whenever he sat down to a meal. Remember the Athenians, and the others who had also dared assist the Ionians, he would.

An initial campaign was sent north into Thrace which also had a navy shadowing the land forces as they marched following the coast line. This campaign would ultimately run into disastrous problems causing the commander to return into the empire. The naval force would be destroyed, not by the Greeks but by a storm that whipped up as the fleet rounded the notorious Mt Athos. While, the land forces would encounter unexpected resistance from the Thracians who would also wound the Persian commander, Mardonious.

The second campaign would see a fleet assembled which would transport the Persian land forces across the Aegean in what would amount to an Island-hopping campaign. Along the way Persian policy towards those willing to submit and those who would resist were on full display, acting as an example to those yet to encounter the armada.

Accompanying the Persian fleet was the old exiled Tyrant of Athens, Hippias with the expectation that he would be re-established as the leader in Athens, answerable to Darius of course. Before landing in Attica the Persians first laid waste to another polis who had accompanied Athens during the revolt, Eretria. Once revenge had been taken against them the fleet now made its way to a bay along the Attic coast known as Marathon Bay.

Marine Archaeological sites of the Greek and Persian Wars

Map of the First Persian Invasion 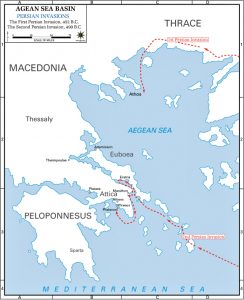