The Battle of Marathon

The Persian forces had landed at Marathon Bay unopposed and had set up camp. The Athenians and Plataeans had now arrived at Marathon to challenge the Persians invasion. A stand off had ensured with both sides not taking the initiative, the Athenians debating wether to even fight at the Bay.

Eventually, Miltiades would convince his fellow Athenian commanders to give battle. With a rousing speech that would bring Callimachus round to the merits in his arguments. The Greeks were outnumbered and made arrangement to match the Persian line. This though, would provide a weak point for the Persians to exploit.

The Greek phalanxes crashed all along the Persian line, engaging in a manner, we are told, like never before, cover the distance at a run. It is still debated today what caused the Greeks to all of a sudden to act this day. The Persians would exploit the weak point in the Greek line but this early success would turn out to be a disaster. The Persians now were in a panic making their way back to their ships with the Greeks in toe, the carnage on the shore line would have been horrific.

Tradition would have it that news of the Persian rout would make its back to Athens by the first Marathon run by Pheidippides. The Persian were able to embark the survivors of the battle and now made their way to attempt a direct attack on Athens. Though as they came into view, they could see the Athenian force prepared to give battle once again. They had travelled back to Athens from Marathon bay well aware the acropolis had been left undefended. This would effectively see the end of the first Persian Invasion, but the Persians would be back.

The Burial mounds of the Athenians and Plataeans 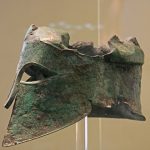