The Athenians and their Plataean allies had effectively put an end to the first Persian invasion at the Bay of Marathon in 490 BC. Athens would continue to emerge as a powerful city state with their confidence after their victory. The Hero of Marathon, Miltiades would fall from favour with a new figure coming to dominate the political landscape for a number of years to come.

Back in the Persian Empire the defeat at Marathon would not be a disaster but would still be an annoyance to Darius. Though, before further action could be taken against the Greeks Persia had problems within their own Empire that had to be resolved, with two important regions attempting to revolt, Egypt and Babylon.

Once the empire had been stabilised preparations began to attempt a second invasion of Greece. A new king would lead this invasion as Darius had died of an illness before he could see the plans through. Xerxes was Darius’ son and would lead the forces against Greece unlike his father who had remained in Persia during the first invasion.

The army Xerxes assembled was larger than anything that had come before it in the ancient world. This time around there would be no doubt that the conquest of Greece was the main objective. Great feats of engineering would also be undertaken to assist in the march of this colossal force. To put a stop to the invasion this time around the fiercely independent Greek city states would need to unite against this common enemy.

An Ostraca with Aristides name scratched on it

The many peoples that would make up Xerxes army 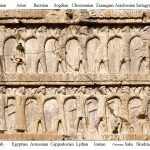 Location of Xerxes canal and the bridge at the Hellespont