With Xerxes arranging the full resources of the Persian empire in an invasion against Greece, word would have filtered back to Greece of the preparations. The Greeks would not sit by idle but would now attempt to take measures to see a halt be put to the Persian advance. This time around it wouldn’t just be Athens and Plataeans meeting the Persians on the field of battle.

In the years between Marathon and Xerxes invasion, politics had been continuing in Athens. The new public figure to have risen, Themistocles would see that a policy shifting Athens to a naval power would emerge. This would have huge impact on the coming war and also well into the future.

To have any hope against the force assembled by Xerxes, the Greeks would need to unite in a common cause. This would prove to be a difficult task in a land dominated by fiercely independent city states with their own interests.

A league would be formed, though with only a fraction of the thousands of city states that dotted the Greek main land and Aegean. This would become to known as the Hellenic league and cooperation within it would rest upon a razors edge. Finally, the league would meet the second Persian invasion for the first time at the pass of Thermopylae and the straights of Artemisium. 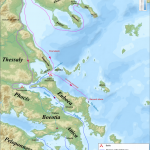 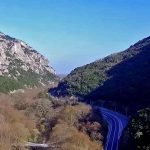 The sites of Thermopylae and Artemisium