The Initial defence plan the Hellenic league put into action saw a land force attempting to block the Persian army’s march into Greece. Though, this was part of a larger plan which also saw a Greek fleet take up a position at Artemisium to block the advance of the Persian navy. Their position was located some 40 miles north east of Thermopylae and would help protect the hoplites in the pass being outflanked by Xerxes armada.

The Greek fleet was commanded by the Spartan, Euryrbiades although they supplied one of the smallest contingents. The majority of the fleet was made up of Athenian vessels, with them being commanded by their cunning leader, Themistocles. Themistocles also comes down through history as a driving force in the fleet’s strategy and would influence the decisions made in the Greek camp.

Tradition has it that while the fighting was raging in the pass at Thermopylae, the naval action at Artemisium was also unfolding over the same 3 days. The Greeks would use the position at Artemisium to their advantage and look to nullify the Persian’s superiority in numbers. They would also employ cleaver tactics to avoid a decisive action, while the “gods” would also provide some assistance.

The final day at Artemisium would see the Persians attempt to force a full-scale engagement. Both sides would suffer in the action with the Persian fleet receiving the worst of it. The Greeks though, decided they would need to withdraw as they could ill afford the losses taken, the Persians could sustain a battle of attrition. News had also arrived that the Greek position at Thermopylae had fallen. The position had also now become irrelevant, the march into central Greece was now open.

Looking across the straits of Artemisium 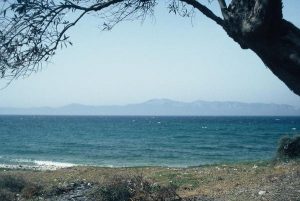