The Fall of Athens

The defenders of the last stand at Thermopylae and the Spartan king lay dead, the Persians now in control of the pass. At Artemisium, the Greeks had decided to withdraw from their position due to not being able to sustain the losses they were taking and news of the fall of Thermopylae. The path into central Greece was now open to Xerxes and his forces.

The Persian army would march throughout central Greece adding more cities to their list of subjected peoples. Those cities and villages that continued to resit in the face of the Persian forces were raised to the ground with their people fleeing, killed or captured. Though, some divine intervention would see the Persians being unable to add Delphi to it subjected peoples.

With the news of the Persian advance, Athens had been evacuating its people across to the Island of Salamis. Xerxes would arrive to a mostly deserted Acropolis, laying siege to the few defenders and then capturing the city. He was now in control of the ultimate prize and would now take revenge for the destruction at Sardis the Athenians had been involved in some 20 years earlier.

Athens now lay in ruins but the Athenians were still a powerful Polis. They still possessed one of the largest fleets in all of Greece. The other members of the Hellenic league were also on Salamis, but much debate was taking place on whether they should depart and make their way to the Peloponnese. The fate of Athens now rested on if the Greeks at Salamis could unite and challenge the Persians there. Themistocles, the Athenian leader would try all he could to make this a reality.

Archaeological remains known as “Persian Rubble”, remnants of the destruction of Athens 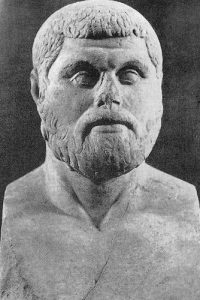