The Battle of Thermopylae

The Greeks had now arrived at the pass of Thermopylae, in all there were some seven thousand Greeks present. They were led by the Spartan King Leonidas at the head of his three hundred strong Spartan force. Their position would be further supported by the combined Greek fleet some 40km away at Artemisium.

Defensive arrangements in the pass were undertaken as Xerxes forces drew closer outside the pass. It was also learnt that a small track in the mountains posed a threat to the Greek position down below in the pass. A sizable force would be detached from the main force and sent up into the mountains to guard this route.

Xerxes would attempt to convince the Greeks to surrender their position, but after four days sitting by idle he would launch the beginning of the battle of Thermopylae. No matter the quality of the troops Xerxes sent against the Greek position they failed to dislodge them from the pass. Even his most vaunted Immortals fared no better than those who went in before them.

Finally the nightmare, Ephalities would inform Xerxes of the existence of the trail in the mountains, betraying the Greek position. Now instead of having to meet the Greeks head on in the narrow pass, his troops could now surround them. Knowing their fate, the remaining Greeks fought till the end with a shower of arrows finishing off the resistance in the pass. The final act of the battle seeing the Spartan solider Dienekes’ response realised, “Good, we shall fight in the shade then”

Map of the Battle 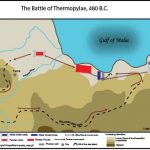 Arrow heads uncovered at the site

“Go, tell the Spartans, stranger passing by That here, obedient to their laws, we lie”