With the founder, Cyrus the Great of the Persian Empire now dead, power transitioned to his son Cambyses. The transition was relatively smooth and the empire remained stable and it was business as usual. Cambyses would lead a campaign and conquer Egypt but this is where his rule took a turn for the worse and the crisis shook the Persian court.

Cambyses reputation in the historical record suffered at the hands of the Egyptian priestly cast, who he was not popular with. Reports of an attempted coup from his brother or a conspiracy from the Magi, the Persian Priests, work their way into the account. Though, Cambyses would die on his way home when attempting to deal with the crisis.

Power now lay with a pretender and would so for the next seven months. Another conspiracy now developed with a band of nobles who sought to bring the Empire back under the rightful ruling line. The nobles would over throw the Magi controlling power leaving the job of ruling the empire coming down to one of them. Darius would be successful in being elevated to the title of King of Persia and was at pains to show his connection to the old ruling line.

Stability would return to the Empire after Darius dealt with the revoting regions of the empire. Once having full control of power Darius continue with the business of empire and expanded the territories even more. It would be in his rule that the Greek and Persian worlds would directly collide with the onset of the Greo-Persian wars, the Ionian revolt lighting the spark.

The greatest extent of the Persian Empire under Darius: Map 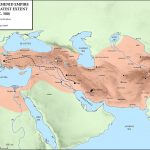