The Mycenaeans were the second recognisable civilisation to emerge in the Greek world during the Bronze Age. They received the name we refer to them as from the palace site of Mycenae, which was seen to have exerted the most influence during the period the Mycenaeans were at their height.

Their golden age occurred as the Minoans were starting to fade into history and everything that was Minoan started to become more distinctively Mycenaean. Many of the later Greek poets would recount tales that seem to look back at this period, such as Homer’s epics, the Iliad and the Odyssey.

Once again, our knowledge of their history relies heavily on archaeological finds, which isn’t conducive to forming a narrative of the period. We can still get an idea though of many aspects of their civilisation from their political systems, resting on a palace system dotted throughout Greece. We also get a glimpse of their trade and international relations, as well as other cultural aspects like writing, religion and military.

The Mycenaeans would also fade into history, but with some of their memories preserved by the poets of later times. Their fall would be part of a wider collapse that saw many Bronze Age civilisations disappear or lose much of their power. This would lead into a period often termed “The Dark Ages”. 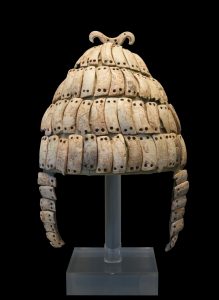