Collapse of the Bronze Age

The Myceneans would now hit a period which saw them disappear into history, only surviving in the tales told for thousands of years. Modern archaeology would come along and begin to try and understand their story.

To this day it still remains a mystery on why they collapsed so suddenly, with many putting forward theories on what caused the collapse. Hostile invasions, internal strife, natural disasters and systems collapse have all been suggested. Not any one of these theories can be seen to explain why the entire Mycenean world collapse – something more complex was at work.

This collapse wasn’t just limited to the Myceneans though. Other Bronze Age civilisations from around the Mediterranean and in the Near East would also either disappear or be reduced scientifically in power, again with their downfall being hard to explain.

All over the Mediterranean world and in Greece, power and wealth seemed to disappear, with societies fragmenting into smaller communities. The signs in the archaeological record show evidence of cultural regression. This, along with the seemingly lack of information after the collapse, has led many to conclude that the Bronze Age world had now entered a Dark Age.

Video by Eric Cline on 1177 the year civilisation collapsed 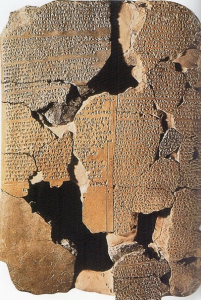