The Hellenic league had now been victorious in two major engagements of 479 BC, at Plataea on the Greek mainland and Mycale in Persian territory. This would effectively see the end of the Persian invasion, and the Greeks victorious. Though, this was not immediately apparent and measures would be taken in the years to come to make sure they would not return.

With the Greek victory, a responsibility to honour the gods that had assisted them needed to be attended to. One did not want to risk offending a god who had helped their city, or disaster could be just around the corner. The various polies would construct monuments and sanctuaries over the years after the victory to show their gratitude. At Delphi, a collective monument would be constructed that listed all of the Greek cities who had been the defenders of Greece.

Back on the ground in Greece after Plataea, mopping up operations continued as Pausanias camped with the army on the Boeotian plains outside of Thebes. His focus now shifted to having the city answer for their crime of Medizing. Operations would also continue off the coast of Anatolia, with the fleet now making for the Hellespont and clearing Persian garrisons on this vital trade route.

With the campaign season of 479 coming to a close the Greeks contingents would now make for the safe ports of their various city states and Islands. But this would not be the end of operations in the Aegean. This could be seen as the end of one chapter and the beginning of another. The decisions and events that would follow, would have ramifications for generations to come. 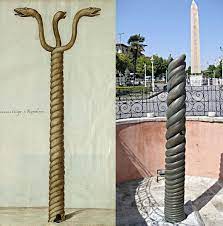 Map of the Hellespont