The Battle of Mycale

The battle of Plataea had been fought and won on the plains of Boeotia, seeing the Persian land forces finally defeated. Though, this wasn’t the end of the campaign, there was still yet another battle to be fought. Tradition would have it that it took place on the very same day as the victory at Plataea. This would see a transition in operations, now seeing the war arrive in Persian territory.

The Greek fleet had also been preparing for operations as the campaigning season of 479 BC approached. The navy commanded by the Spartan king Leotychidas had set up base at the island of Delos after being approached by some Ionian exiles to support a revolt in Anatolia. Leotychidas was reluctant, he commanded a much smaller fleet than what had sailed the previous year. The Athenians yet to join the rest of the fleet.

Diplomatic manoeuvrings with Sparta may explain the Athenian absence, but perhaps compromise between the two would finally see the Hellenic fleet more than double in size with the Athenians arrival. We are told a Samian delegation to the Greek fleet would finally see it sail, but this influx of ships would have seen Leotychidas become more confident in sailing east. The Hellenic league now made its way to the Persians based at Samos.

The Persians would be alerted to the Greeks presence and fell back to the Anatolian coast, beached their ships and prepared defences at Mount Mycale. The Greeks pursued and what had begun as a naval operation would now be decided on land. The Greek victory here at Mycale would see Ionia once again break out in revolt while further operations from the Hellenic league would continue in the Aegean and Hellespont.

Map of the silting up at Mycale 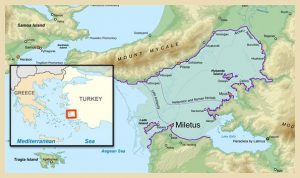