The Battle of Salamis

The Greek fleet had assembled at the island of Salamis, but an agreement on strategy was far from united. To make matters worse, Xerxes had arranged for a show of force outside the straits which saw a few contingents panic and set sail at once. For the rest who remained a decision was made that the fleet would withdraw back to the Peloponnese the next morning.

This would see Athens lost for good and the rest of Greece more vulnerable than ever. Themistocles, though had other ideas and now arranged a ruse, bordering on treason, to try and unite the Greeks to fight at Salamis. He would send a messenger to Xerxes to try and entice him into action before the Greeks had a chance to depart.

Xerxes would act on the information that Themistocles had sent him, mobilising his entire fleet to try and defeat the Greek navy once and for all. The movements become a little confused but appears that both openings of the striates would be blocked in in one way or another. The Greeks would learn of their dire position, which would now see only one option open to them now, to fight.

The battle of Salamis would see the Greek fleet far outnumbered, but the vast number of the Persians would see this inhibit their movement within the striates. With Xerxes looking on, the commanders aboard the Persian ships would foul themselves on one another as they attempted to get into action to impress their king.

The Greeks would suffer many losses in the long days fighting, but the Persians had suffered far worse and were in full retreat out of the striates. As they fell back yet more carnage would follow as Greek ambushes were launched. The Persian fleet was now a spent force and the Greeks had won the battle of Salamis. Though, the level of their victory was not immediately apparent, also the Persian land forces were yet undefeated and the campaign would continue on.

The Battle of Salamis map 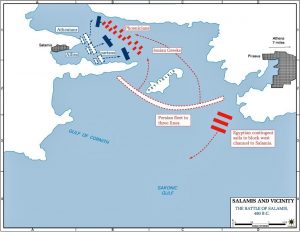 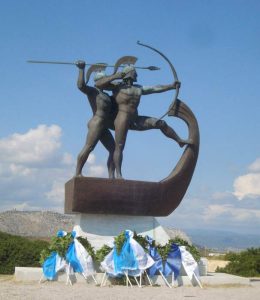