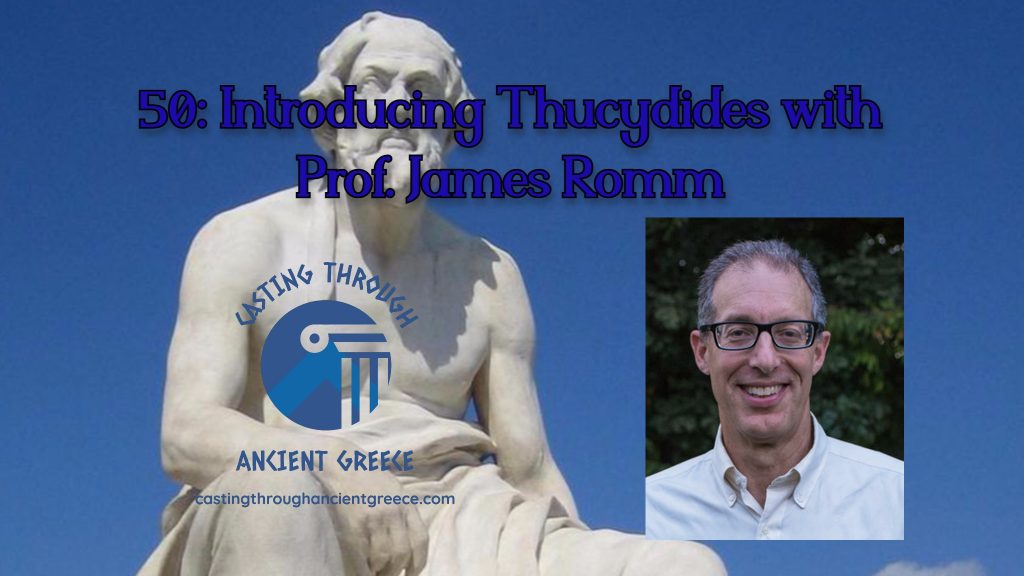 I find it very fitting that with this 50th episode we are now transitioning into a new phase of Greek history. A point that is often officially seen where the Archaic Age ends and the Classical Age starts, its also where we say goodbye to Herodotus as our main foundational source and welcome in Thucydides. While it is also a major transitional event in the Greek world coming away from the Persian invasions, with all of the political and diplomatic developments that would occur leading to conflict from within the Greek world. Though, before picking back up the narrative, I wanted to provide an introduction to this period we will be spending quite some time with. To do this I have invited Prof. James Romm on the show to help give us an introduction to Thucydides and the subject of his history, the Peloponnesian War. I had decided to reach out to Prof. Romm as I had recently come across a book he was involved in titled “The Greek Histories” with came out this year. This work is focused on providing an introduction to a number of Ancient Greek writers, of who Thucydides was one. So, I felt this was perfect timing given where we were currently in the series.

James Romm is an author, reviewer, and the James H. Ottaway Jr. Professor of Classics at Bard College in Annandale, NY. He specializes in ancient Greek and Roman culture and civilization. His reviews and essays have appeared in the New Yorker, the Wall Street Journal, the London Review of Books, the Daily Beast, and other venues. He has held the Guggenheim Fellowship (1999-2000), the Birkelund Fellowship at the Dorothy and Lewis B. Cullman Center for Writers and Scholars at the New York Public Library (2010-11), and a Biography Fellowship at the Leon Levy Center of the City University of New York (2014-15). Prof. Romm is also the author and editor of a number of books including but not limited to, The Sacred Band, Ghost on the Throne, The Greek Histories, the how to, an ancient guide series of books and the landmark Arrian, the Campaigns of Alexander the Great. I have provided links to all of Prof. Romm’s books here on the episode page on the website.

How to Give: An Ancient Guide to Giving and Receiving

How to Keep Your Cool: An Ancient Guide to Anger Management

How to Die: An Ancient Guide to the End of Life

Dying Every Day: SENECA AT THE COURT OF NERO

Ghost on the Throne

The Landmark Arrian: THE CAMPAIGNS OF ALEXANDER

Lives that Made Greek History

On the War for Greek Freedom