The Battle of Plataea

As the sun rose over the plains of Boeotia, the battle of Plataea would now finally be decided this day. The various Greek wings had got underway and began falling back in three sections, the centre having made its way back to Plataea. The Spartan wing had finally moved off leaving a rear-guard force to protect their withdrawal or the protesting Spartan battalion under Amompharetos, depending on how we interpret events here.

Amompharetos and his battalion would start making their way back to the main Spartan line once it had halted. This occurring as the sun was beginning to rise and revealed to the Persians, the Greek line now broken into three separate formations. This would now present Mardonios with the first viable opportunity for an all-out attack of the past ten days.

First the cavalry and then the infantry were sent rushing forward to engage the Greek line. Particular focus had been on the Spartan right wing where it could be seen an isolated formation was retreating without support. The battle that erupted would be fierce and intense all long the line. Most sources give the impression the centre of the Greek line shirked their duties, but hints to this not being the case have survive.

The Spartan wing was engaged with the Persian element of Mardonios forces, while the Athenian left, attempting to come to the Spartans aide were now evenly matched against the Greeks allied to Persia. Mardonios had come forward in the Persian attack to help bolter morale but would fall in battle due to a rock thrown from the Spartan lines. This would now see the Persian forces and their allies waver and a route back to the Persian palisade would take place. This palisade after more intense fighting would also be breached and a general slaughter of the Persians would ensue.

The Hellenic league had won the largest engagement of the Greco-Persian wars and effectively ended Xerxes second invasion.

Map of the Battle of Plataea in its various stages 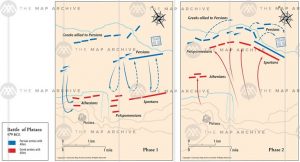 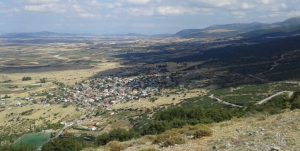 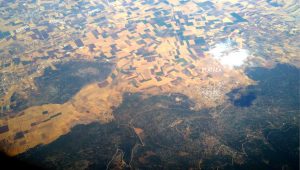