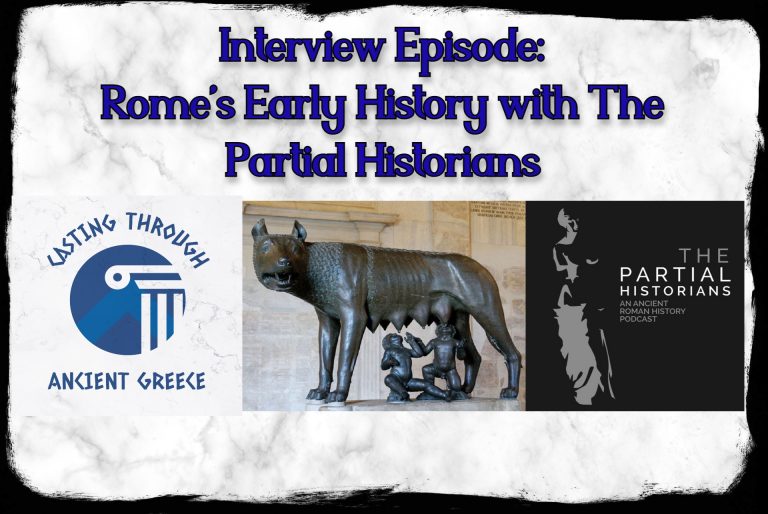 I wanted to do an episode that focused on Rome in the same sort of format I had done with my past Greek Periphery episodes. Though, my knowledge on Roman history is quite rusty at best, so I wanted to enlist some help to present this episode. For this I turned to Dr Fiona Radford and Dr Peta Greenfield from the Partial Historians podcast. Unfortunately, the timing didn’t line up with the series of Periphery episodes I had done, but never the less I still wanted to present this look at Rome. So, I decided to present this episode as part of the interview series where we will take a quick break from our narrative.

Like I said this episode is done with a similar idea as the past Greek Periphery episodes where we look back to some of the earliest times in the region we are focusing on. We then move forward exploring the tales and myths surrounding the foundations before then turning to what more tangible lines of evidence tells us. This will then see discussion move into areas where we then have literary accounts that help provide an idea of what was developing. I thought it would be interesting to focus on the city of Rome, rather than the larger regions we had done before, since Rome is such a well-known city of the ancient world. Though, I also wanted to compare its developments to what was taking place in Greece around the same periods.

In this episode with Dr Greenfield and Dr Radford from the Partial Historians we follow this same formula where we then look at parallels and compare to what was taking place in Greece to help provide some context to the developments in Rome. Instead of looking at Rome over a series of episodes like with the previous periphery episodes we followed the foundations all the way through to the beginning of the republic in this talk stretching for just over an hour and a half. This also coincides with roughly the same period we brought all our other looks at the wider Greek world up to.

Dr Fiona Radford is an expert on Rome on film and wrote her thesis on Kubrick’s Spartacus. Her research interest in film makes her an exponent of not only Ancient History, but also Reception Studies. Dr Radford’s work has taken her across the globe and into rarely viewed archives.

Dr Peta Greenfield is an expert on the Vestal Virgins, a collective of six priestesses whose aedes (temple) was located at the edge of the Roman forum. Her research interests include: the intersection between religion and politics in Rome, the Late Republic (c. 150 BC – 31 BC) and Augustan Period (c. 31 BC – AD 14), and the role of women.

Together both Dr Greenfield and Dr Radford produce and present the Partial historians podcast were they discuss, spar, and laugh their way through different aspects of the Roman world.

They would love to have you along for the ride! And you can find them where ever you get your podcasts.