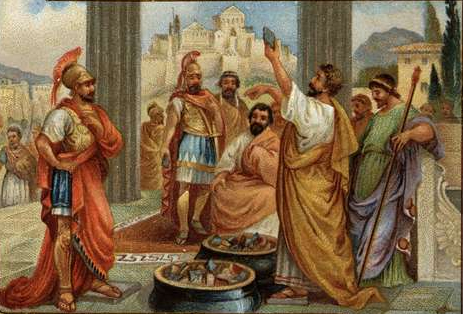 Events during the 460’s would see the political sands in Athens begin to shift, with opposition to Cimon’s influence increasing in the sources. This would first come through charges of corruption at the conclusion of the Thasos campaign. While a more successful attempt would take place with Sparta’s rejection of Athenian assistance during the helot revolt, assistance Cimon had supported sending.

This would see the emergence on the pages of Athenian history, two new influential political figures. Ephialtes and Pericles would mount a similar opposition to Cimon’s policies as Themistocles some ten years earlier. Ephialtes would appear to head this opposition while Pericles, the son of Xanthippus would be his junior.

They would be successful in shifting public support away from Cimon, while also managing to have him ostracized. This would see Cimon removed from Athenian politics for the next 10 years, allowing the policies of Ephialtes, Pericles and their supporters to now dominate the political institutions within Athens.

The changes that would develop in Athens would open the way for a more direct form of democracy to develop. This would see the aristocratic institution of the Areopagus attacked and its powers severally reduced in favour of the council of 500 and the assembly. This would give more say over affairs in Athens to a broader range of classes. However not all would be pleased with these developments as Ephialtes would become a victim of political violence.